While completing this dungeon you can use as well as and for Ghost enemies to maximize your damage output.

Once completed, this dungeon path will reward you with: 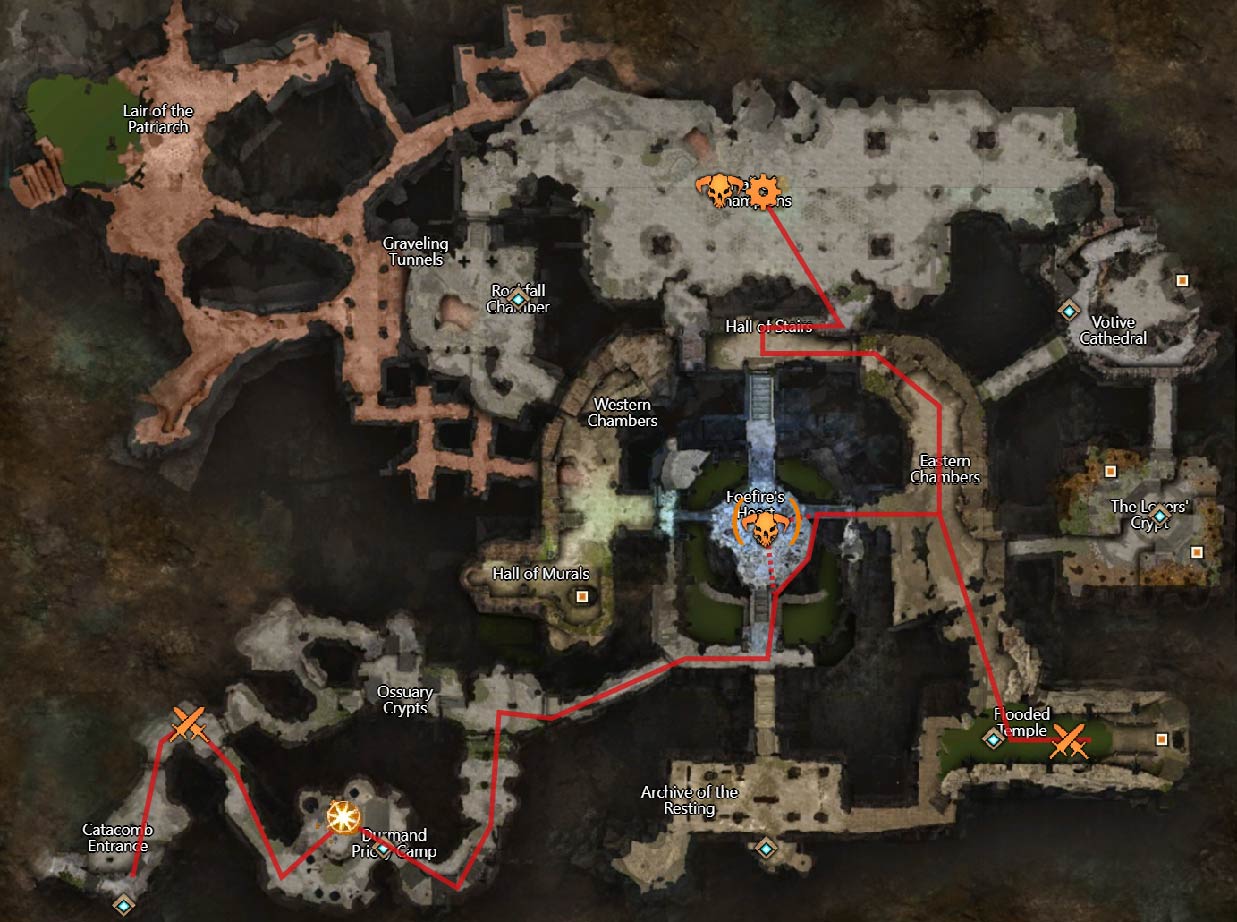 Go near the Priory Explorer to trigger a cutscene. The door behind him will open afterwards, exposing you to the Elite Graveling Breeder. He is surrounded by Spike Traps that appear and disappear every few seconds. You cannot mitigate the damage in any way, so wait until they are gone or walk over the coffins to the right. The Breeder will either hit you with attacks that deal power damage and Weakness or summons Graveling Hatchlings that deal a lot of Bleeding.

The Elite Graveling Breeder has no breakbar. CC him regularily to prevent Hatchlings from spawning.

Upon killing him, a door will open and you can follow the 3 Path NPCs to select the path at Shrill Sunderbark after a small dialogue.

You can use Swiftness or even Superspeed to speed up the NPC escort.

Follow the stairs. There will be a Graveling Burrow spawning at the bottom of the stairs that summons Graveling Hatchlings. Those deal a lot of Bleeding. This event is not required for path completion and can therefore be ignored. If you decide to kill the Burrow, keep in mind he does not take any Condition Damage.

The Graveling Burrow event won't spawn until the path has been selected. Simply keep the path selection window open and delay it for an easier time.

The next room has a lot of Spike Traps and Flame Jets that can easily kill you if you dont pay attention. Hug the wall of the left and jump straight over the fence instead of going down the stairs to avoid them.

The room you are in is filled with Spider Hatchlings, that are either Level 35 or anything between Level 1-5. They shoot projectiles that will inflict Poison. Bringing a reflect or projectile destruction might help. Additionally, the room is filled with 4 Gargoyle Heads that don't take Condition Damage. They shoot AoEs that will shoot AoEs that inflict Burning. Some Heads are too high for most melee attacks and require ranged attacks if you decide to kill them.

Killing all low-level Hatchlings spawns the Spider Queen and some additional Spider Hatchlings.

You should either kill the Spider Queen very fast by CCing and bursting her down, bring reflects or kill all Spider Hatchlings and Gargoyle Heads before spawning the Spider Queen in order to reduce pressure.

The queen has 3 attacks:

If you struggle to fight the Spider Queen, try to clear the room completely and then range her. She won't follow you and this way, you only have to deal with the Venom Spray attack.

The corridor that opens upon killing the Spider Queen contains a few Elite Graveling enemies and a Champion Graveling Stalker. They can kill you extremely quickly. You can either kill them or use Stealth to bypass. Furthermore, the room is full of the undodgable and unblockable Spike Traps you've encountered at the beginning of the path. Every now and then, there are safe spots for you to carefully plan your next steps. Pulling the chain at the end of the corridor deactiavates all traps. On the middle island in the main room, you will encounter Lieutenant Kohler.

You may also encounter a Cave Troll here that can spawn at multiple random points throughout the dungeon. He is super deadly and can wipe whole parties quickly. He is not required for path completion, hence it is advised to just run away from him. Kohler is an optional and is not required for path completion. Although, killing him activates [wp:[&BP8EAAA=]]Foefire's Heart Waypoint[/wp], so you can consider if it is worth for you to kill him or not. He will spawn 2 Elite Ascalonian enemies every 25% of his health. Kill them passively or even actively to reduce pressure. Kohler is a tanky boss with a lot of attacks:

After killing Kohler or skipping him, traverse the eastern bridge to the Eastern Chambers and then south to reach the Flooded Temple. You will encounter Spiders, Gravelings and undodgable traps, so watch out for them.

To complete this event, you have to kill a lot of Graveling enemies. There are 5 traps, activated by chains, that will instantly kill anything except for the Champion Graveling Breeder in the zones seen in the picture below. You can trigger these every few seconds.

If you are in a full party, you can have one or two people bait the Gravelings into the traps while the other party members pull the chains constantly.

The goal is to kill a certain amount of Gravelings and the Breeder before Detha dies. She wields some bomb traps, so whenever she loses 25% of her health, she will instantly kill all Gravelings around her, again, except for the Breeder, who will occasionally spawn additional, smaller Gravelings.

After you are done, teleporting to the newly created waypoint can save some time.

Make your way up north and traverse the Eastern Chambers. Make sure to watch out for the enemies and traps you encountered before. Enter the Hall of Stairs and take the stair that leads east. You might encounter Gravelings next to it. They are hard to kill, so run past them or use Stealth. At the top, you find a chain that needs to be pulled to open the door to the Hall of Champions. Walking close to the chain spawns some Oozes, so quickly pull the chain and escape north into the Hall of Champions.

If you killed Lieutenant Kohler, use [wp:[&BP8EAAA=]]Foefire's Heart Waypoint[/wp] and use the northern bridge to save time. 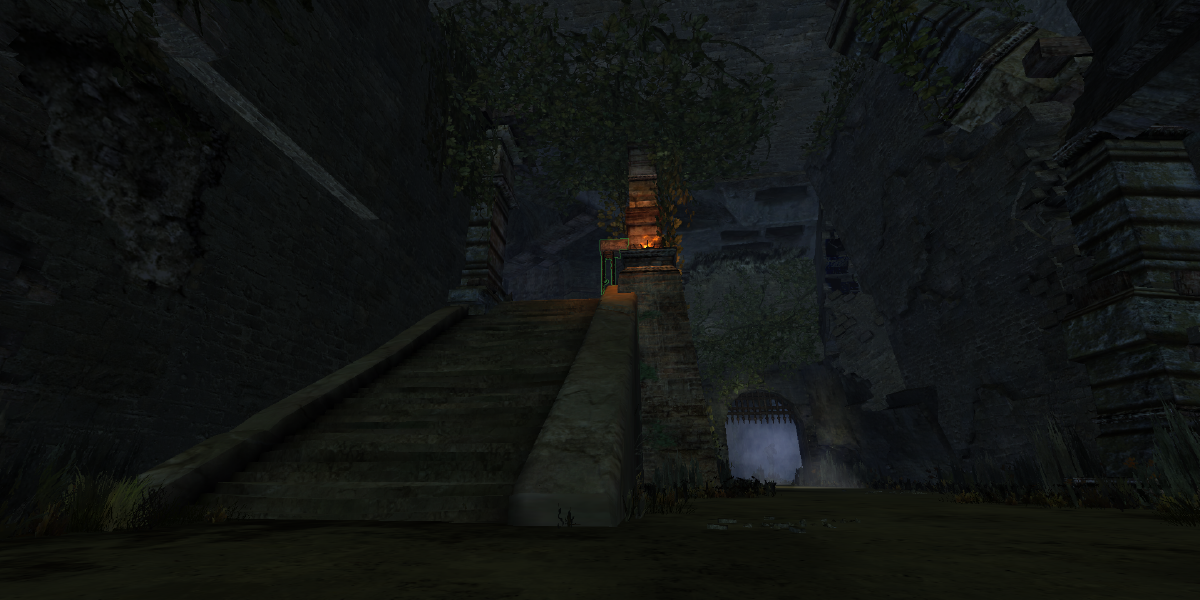 Going into the middle of the Hall of Champions will make Detha start the Ghostly Traps event. Make sure that she is not in combat or dead when you start the event, or the path might bug out and cannot be completed anymore. Your goal is to protect her while she sets up 3 Ghostly Traps. She will always start with the western trap, then east, then north.

You can give Detha Quickness to speed up the building process.

Whenever she starts building a trap, a group of 5 Elite Ascalonian enemies will spawn. Focus the Elementalists, Rangers and Necromancers since they have the highest damage output and will apply nasty conditions like Poison, Bleeding, Immobilize, Weakness and Cripple.

You can use the nearby pillars on each trap to break the line of sight on the enemies and thus pull them together. Projectile mitigations and condition cleanses will reduce pressure.

Once Detha has build 50% of a trap, she will move on to the next and will build 50% there. That means that she will do two full rotations around the traps before the event is done. If you don't pay attention, the Ghosts will attack Detha and CC or even eventually kill her.

You can revive her and she will just go back the cannon she was building, but keep in mind that this spawns yet another enemy wave, so you might want to kill the current wave first. Her behavior after dying is a bit unforeseeable, she might not switch at 50% but instead will build the full trap if she can.

The fastest strategy is to give Detha Stability and just let the ghosts kill her. You then use a skill that can revive dead NPCs and she will build the whole trap in one go. After the revive, you can kill the ghosts. For the last trap, giving her Stealth or kiting the enemies for long enough will be sufficient since she cannot swap traps anymore. This strategy requires party-wide coordination and should not be attempted in random parties.

After the traps are built, all enemies will disappear and you talk to her to trigger the endboss, the Ghost Eater.

The Ghost Eater spawns with Ghost Shield that prevents him from taking any damage. Hitting him will spawn Ectoplasmatic Oozes, also having Ghost Shield.

To remove this buff for 30 seconds, charge one of Detha's Traps and lure the Ghost Eater into it. This is done by picking up an Anti-Spectral Ordnance found next to the traps and using Lift Ectoplasm (#1) on an Ectoplasmatic Ooze and then have another party member use Pull Ectoplasm (#2) to pull the Ooze into the trap. Do this with 3 Oozes to charge up a trap completely. If you happen to see an Ooze being in a trap already, simply lift it to power the trap. Repeat this process until he is killed.

You can use Lift Ectoplasm to hit the Ghost Eater. Assuming you don't have any on-crit traits or sigils selected, this will spawn the Ectoplasmatic Oozes but won't trigger the Ghost Eater. This gives you a much easier time when setting up a trap.

Being near to the Ghost Eater will regularily inflict Vulnerability. If he is being aggroed, he has 2 attacks: