Joining your first squad can be a pretty daunting task. This guide will hopefully take away some of that pressure by guiding you step-by-step through the normal process. You will learn the lingo and typical requirements. 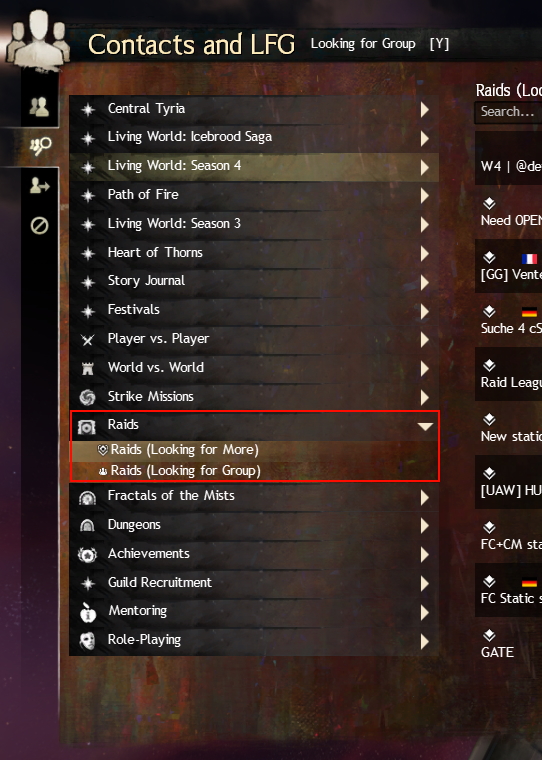 Let’s dive straight into the lingo as it will be the first thing that you will see in any raid LFG (Looking for Group). A quick reminder that you can find the raid LFG if you press Y (Default) and scroll down to raids. So, you’ve found the raid LFG, but what do all these acronyms and numbers mean?

The first thing to distinguish is if you are raiding on EU or on NA. Typically, groups on EU will look for LI or LD ( or respectively). Groups on NA normally ask for KP (Kill Proof for a specific boss e.g. (Xera), (Cairn), (Mursaat Overseer), etc).

s are a currency earned by defeating encounters in Wings 1-4. One is rewarded per encounter per week with a total of 15. The same applies to but for wings 5-7 with a total of 10 per week. Kill proofs are also a reward for clearing encounters and are contained within boss coffers. You are rewarded with a random amount between 1 - 5. It is also possible to obtain one per week by completing all End of Dragons strikes to fulfil the weekly achievement.

Other “Kill Proofs” can include Legendary Armor, or the title for having all three sets (Envoy's Herald). Likewise some titles for clearing raid challenge mote content are also considered kill proof. If you are reading this guide, then the previous two points are probably moot but it’s best to know that they exist.

The next thing you’ll see in the LFG is most likely the wing or encounter that the squad will do. Wings are normally shortened down to simply a “W”. i.e W1 meaning Wing 1 or W1 - W4 meaning a full run of Wing 1 through to Wing 4.

Next comes squads that are looking to clear specific bosses. This is when the acronyms can get a little bit more confusing. The table below will clear that up!

Another thing you might see is squads listing the wing that they will do, followed by the bosses but without names. I.e W1 B123 or W4 B234.

Which classes do they want?

So now you understand the requirements and which wing, encounter or boss the LFG is looking for. Now it’s time to learn the acronyms for classes or specific builds.

Almost all class acronyms are extremely self explanatory as they derive from the class or specialization name. Check out the table below for the most common ones.

Some elite specializations, like , can carry out a variety of roles which means that squads will always specify exactly what they are looking for. Healbrand or Quickbrand are common examples. This type of nomenclature is also common with or .

The final few strange words you might come across are normally linked to the encounter specific role or the trait that is required. The latter becomes slightly more complicated as they are constantly changing with the meta.

Additional, certain mechanics such as “Cannons” or “Greens” might be asked for. These relate to destroying the cannons at or dealing with the “Green” mechanic at .

So, now you know what the squad’s requirements are, what boss or encounter they are doing and what classes they are looking for. Now what?

Well, do you meet the requirements? Is this the encounter you want to do? Do you have the build or class they are looking for? If yes, then join it! Normally the commander of the squad will immediately ask you to state the role you are filling and to “ping” your LI, LD or KP. As previously said, faking your experience will probably lead to an embarrassing moment after the first pull of the boss. So best not to do it.

If this all still seems terribly scary, the best way to get into raiding will be through training groups. Both EU and NA have a large variety of training groups that will help you start your journey through raids!